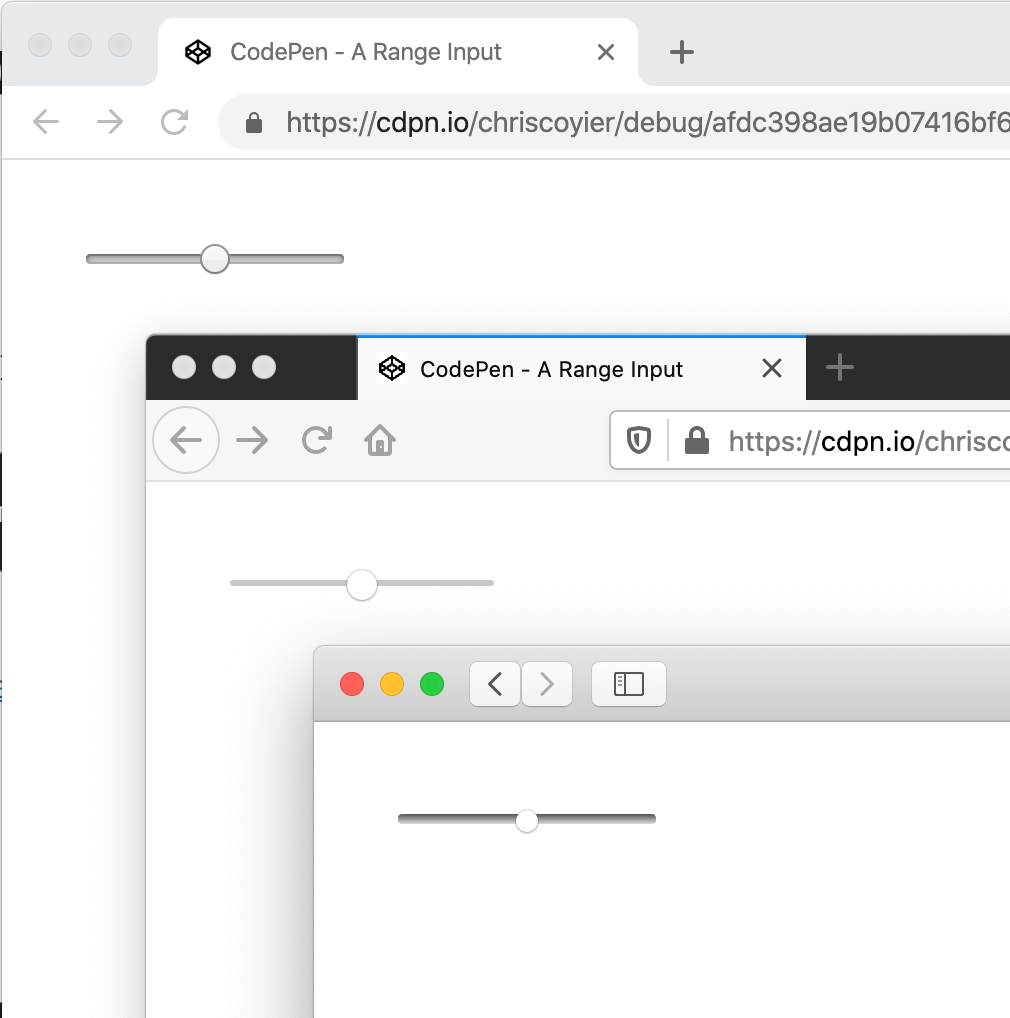 In browsers that support them, they look like this:

Now that’s great and all. You could use it for anything where you want to collect a number from a user that has an enforced minimum and maximum value.

But notice anything weird? All by itself, that range input doesn’t communicate to the user what number they will actually be submitting. Now if your input is something like “How are you feeling? Left for sad, right for happy.” – then fine, you probably don’t need to show the user a number. But I would wager it’s more common that you’ll need to show the number than not show it.

To be fair, the spec says:

The input element represents a control for setting the element’s value to a string representing a number, but with the caveat that the exact value is not important, letting UAs provide a simpler interface than they do for the Number state.

But c’mon, just because we want a cool slider doesn’t automatically mean we should prevent the user from knowing the submitted value. I wouldn’t necessarily say browsers should alter their UI control to show that number. I am saying we should build that ourselves!

This is the perfect use case for the <output> tag, which is specifically for values calculated by form elements. Here is a super simple implementation of how you might use it:

Our goal here is to display a “bubble” that shows the current value of a range input.

Setting the value of our “bubble” from the value of the input is a matter of pulling the range value and plopping it in the bubble:

The trick is positioning the bubble along the range input so it slides alongside the “thumb”. To do that, we’ll need to calculate what % the bubble needs to be scooted to the left. So let’s make a function to do that to keep things a smidge cleaner:

Here we’re making sure we account for the range inputs min and max attributes and calculating a % position between 0-100 based on the current value in that range. Not all ranges are the default 0-100 numbers, so say a range was at value 50 in a range of 0 to 200, that would be 25% of the way. This accounts for that.

We can use some magic numbers there that seem to work decently well across browsers:

I was inspired to poke around with this because reader Max Globa wrote in with their version which I’ll post here:

A cool aspect of Max’s version is that the range input is CSS-styled, so the exact size of the thumb is known. There are some numbers that feel rather magic in the JavaScript math, but at least they are based on real numbers set in the CSS about the size of the thumb.

Dave Olsen ported the (original) idea to not have a dependency on jQuery. Here’s that version:

Don’t forget range input can have datalists which put little notches on them which is kinda cool.

Ana Tudor has a massive collection, many of which indicate the current value through their design.

😬 Old Version from Original Version of this Post (jQuery, plus doesn’t work as well)

Just leaving this in here for historical reasons.

Let’s pull in our friend jQuery and get our CSS on. This goal is below. Any range input, any time, any min/max/step – we put a bubble above it showing the current value.

Let’s style the output element first. We’ll absolutely position it above the input. That gives us the ability to adjust the left value as well, once we figure out with JavaScript what it should be. We’ll fancy it up with gradients and border-radius, and even add a little pointer triangle with a pseudo-element.

Now what we need to do is watch all range inputs for a change in their value. Our goal is to shift the left position of the bubble in pace with the slider. That’s not the simplest thing in the world, being that sliders can be of any width and any minimum or maximum value. We’re going to have to do a little math. Here’s all the jQuery JavaScript, commented up:

The one gross part in there is that 1.3 value. I was trying to line up the tip of the bubble’s triangle with the center of the slider. It’s not easy, because the slider’s center is never 100% left or right. That value isn’t perfect, nor perfectly implemented, but it’s better than not having it.

As a bonus, browsers that don’t support the range input still get the bubble action.

The above code depends on the range inputs having a specified min and max value. If they don’t it kinda breaks. I think it would be weird to use a range input without specifying these things, although if you don’t it seems they default to 0 and 100. To bulletproof this, you’d grab each attribute, test it, and if it didn’t look right fix it. Something like:

…then use the minValue variable in the math. And do similar for max. Anyway, here’s the live demo: