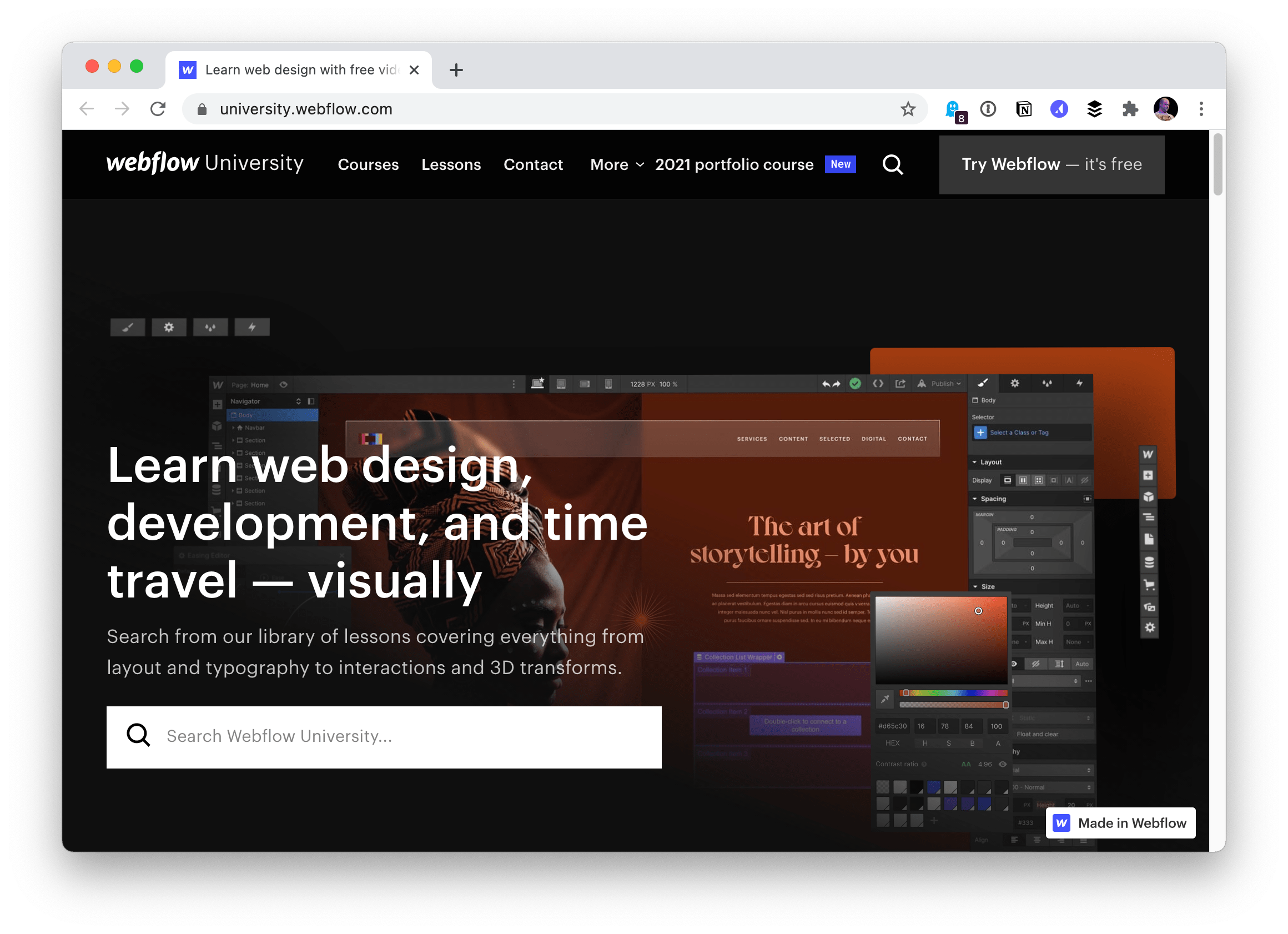 It feels like a trend (and a smart one) for tech platforms to invest in really high-quality learning material for their platform. Let’s have a gander.

Surely Webflow is thinking: if people invest in learning Webflow, they’ll be able to build what they need for themselves and their clients in Weblow, and they’ll stick around and be a good customer.

Surely Netlify is thinking: if people really grok Jamstack, they’ll build their existing and future sites using it. They’ll get comfortable using Netlify’s features to solve their problems, and they’ll stick around and be a good customer.

Surely Salesforce is thinking: if we train people to learn Salesforce and build Salesforce-specific software, not only will they be a good customer, but they’ll bring more customers to us and help big companies stay good customers.

This is not created by Figma themselves, but by Pablo Stanley, who must be thinking: I can teach people to use Figma, and along the way show them how cool and powerful Blush is, which will gain Blush good customers.

Surely Apollo is thinking: if y’all know GraphQL, and learned it in the context of Apollo, you probably continue using Apollo and bring it to the teams you’re on, which might make for great customers.

This one is an outlier because these are paid courses, but my guess is that Automattic is thinking: there is already a ton of WordPress learning material out there, why not leverage our brand and deep expertise to make content people are willing to pay for.

Surely Atlassian is thinking: if we are the place where people literally learned Git, we can sprinkle in our tooling into those lessons, and you’ll use those tools for your Git workflow, which will follow you through your entire developer career. Not to mention this is good SEO juice.

GitHub does the same thing.

Helping your customers learn your platform is certainly not a new concept. The word “webinar” exists after all. It’s a funny word, but effective. For example, AWS Marketplace sponsors CodePen emails sometimes with the idea of getting people to attend webinars about certain technologies. Wanna learn about Apache Kafka? You can do that for free coming up Thursday, February 25th. Surely AWS is thinking if people learn how this technology works, they’ll use AWS and AWS Marketplace partners to spin it up when they get to using it.

What feels a new here is the idea of packaging up learning material on a microsite with a fancy design and making it feel in-line with modern learning platforms. Like you are going to some expensive code school, except you’re getting it for free.

I’m a fan of all this. It’s good marketing for companies. It’s a good learning opportunity for everyone else. It’s also very biased. Learning materials you get directly from companies is going to tell you all about how great the technology of that company is. You should know that going in, if it’s isn’t obvious.

I’m also a fan—perhaps an even bigger fan—of paying for high-quality learning material. Our learning partner, Frontend Masters, has no particular bias to technology because you’re their customer. If they help you, they succeed and you succeed as well.

I’ve been using CSS as a web developer since CSS became something we could actually use. My first websites were built using <font> tags and <table>s for layout. I remember arguments about whether this whole CSS thing was a good idea at all. I was quickly convinced, mostly due to the ability to easily change the font on an entire site in one place. Managing common styles was so useful at a time when most websites were just a stack of HTML pages with no management of content or any form of templating. I was an early adopter of using CSS rather than tables for layout, despite the backdrop of people asking, “but what about Netscape 4?”

CSS is a remarkable language. Those early sites were developed in a time where the best we standards advocates hoped for was that browsers would support the CSS that existed; that developers would validate their HTML and CSS and use the CSS that existed. Yet, a website built back then that is still online, or one accessed via the Wayback Machine will still work in a modern browser. Such is the care that has been taken to not break the web by the CSS Working Group, and the other groups working to add features to the web platform.

I’ve been teaching CSS for almost as long as I’ve been using CSS. I’m incapable of having a thought without turning it into words. I write things down to remember them, I write things down to help them make sense to me. This leaves me with a lot of words, and from the earliest days of my career I had an idea that they might be useful to other people and so I started to publish them. Over the years I’ve learned how to teach people, discovered the things which seem to help the various concepts click for folk with different ways of learning and processing information. Since the early days of CSS layout, we’ve been teaching it along the following lines.

Typically we would teach CSS by jumping right in, styling up a layout and explaining the strange collection of hacks that allowed for a layout as we went along. Unlike other languages, where we might start with the core fundamentals of programming, in CSS we had very few concepts to teach outside of building things and explaining the weirdness in the context of actual layouts. The Box Model was important because it was all we really had in terms of layout. It was core to our method of giving things a size and pushing them around in a way that would allow them to line up with other carefully sized things to make something that looked like a grid. If you didn’t understand the standard Box Model, and that the width you set wasn’t actually the width the thing took up, your carefully calculated percentages would add up to more than 100%, and bad things would happen.

Over the last few years, we’ve been handed all of these new tools, Flexbox and Grid give us a layout system designed for CSS. Perhaps less obviously, however, a set of concepts are emerging that give us a real way to explain CSS layout for the first time. There has been something of a refactoring of the language, turning it from a collection of hacks into something that can be taught as a cohesive system. We can start with normal flow and move onto what it is to change the value of display because it is here that all of our new layout capabilities live. We can share how display controls two things – the outer value of block and inline and the inner formatting context – which might be grid, or flex, or normal flow.

Explaining Writing Modes early on is vital. Not because our beginner is going to need to format a vertical script, or even use vertical writing creatively immediately. It matters because writing modes explain why we talk about start and end, and the block and inline dimensions rather than the physical top, right, bottom and left corners of their screen. Understanding these things makes alignment in grid and flexbox and the line-based positioning in grid much easier to understand. The Box Model can then drop back to a brief explanation of the fact that width and height (or inline-size and block-size) relate to the content-box and we can change it to relate to the border-box with the box-sizing property. In a world where we aren’t giving things a size and pushing them around, the Box Model becomes just part of our discussion on Box Sizing, which includes the intrinsic sizing far more useful when working with flexbox and grid.

Finally we need to focus on the idea of Conditional CSS. Media Queries and Feature Queries mean we can test the environment of our user using metrics such as their viewport size, whether they are using a pointing device or a touchscreen, and the capabilities of their browser. We can never be sure how our websites are going to be encountered, but we increasingly have the ability in CSS to optimize for the environment once we are there. One of the greatest skills we can give to the person beginning their journey as a web developer is an understanding of this truth. The person visiting your site might have a touchscreen, they might be using a screen reader, they may be on a small-screen device, and they might be on IE11. In all of these cases, there are things you want to do that will not work in their situation, your job is to deal with it and CSS has given you the tools to do so.

As I started my CSS layout journey with a backdrop of people complaining about Netscape 4, I now continue against a backdrop of people whining about IE11. As our industry grows up, I would love to see us leaving these complaints behind. I think that this starts with us teaching CSS as a robust language, one which has been designed to allow us to present information to multiple environments, to many different people, via a sea of ever-changing devices.