Making Tables With Sticky Header and Footers Got a Bit Easier

It wasn’t long ago when I looked at sticky headers and footers in HTML <table>s in the blog post A table with both a sticky header and a sticky first column. In it, I never used position: sticky on any <thead>, <tfoot>, or <tr> element, because even though Safari and Firefox could do that, Chrome could not. But it could do table cells like <th> and <td>, which was a decent-enough workaround.

Sounds like a big effort went into totally revamping tables in the rendering engine in Chromium, bringing tables up to speed. It’s not just the stickiness that was fixed, but all sorts of things. I’ll just focus on the sticky thing since that’s what I looked at.

The headline to me is that <thead> and <tfoot> are sticky-able. That seems like it will be the most common use case here.

That works in all three major browsers. You might want to get clever and only sticky them at certain minimum viewport heights or something, but the point is it works.

I heard several questions about table columns as well. My original article had a sticky first column (that was kind of the point). While there is a table <col> tag, it’s… weird. It doesn’t actually wrap columns, it’s more like a pointer thing to be able to style down the column if you need to. I hardly ever see it used, but it’s there. Anyway, you totally can’t position: sticky; a <col>, but you can make sticky columns. You need to select all the cells in that column and stick them to the left or right. Here’s that using logical properties…

Here’s a sorta obnoxious table where the <thead>, <tfoot>, and the first and last columns are all sticky.

I’m sure you could do something tasteful with this. Like maybe:

The post Making Tables With Sticky Header and Footers Got a Bit Easier appeared first on CSS-Tricks. 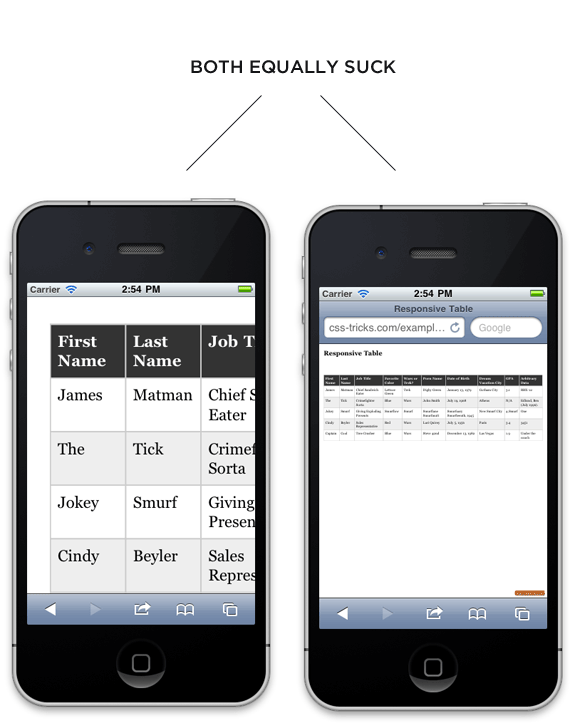 In Defense of Tables and Floats in Modern Day Development

Twenty-plus years ago, tables were the main way web pages were created in HTML. It gave web builders consistent control of constructing pages with some “design.” No longer did sites only have to be top-to-bottom in a linear manner — they could be set up with columns that align left-to-right and top-to-bottom. Back then, it was seen as a huge breakthrough.

Tables, however, were never designed to lay out pages and, in fact, have all sorts of problems when used that way today. It was a convenient hack, but at the time, a very welcome one, particularly for those trying to achieve a super-specific layout that previous ways couldn’t handle.

Fast-forward to modern days and it’s now obvious that were tons of issues with the table layout approach. Accessibility is a big one.<table>, <th>, <tr> and <td> elements aren’t exactly accessible, especially when they’re nested several levels deep. Screen readers — the devices that read web content and serve as a measure of accessibility compliance — struggle to parse them into cohesive blocks of content. That’s not to say tables are bad; they simply were never intended as a layout mechanism.

Check out this table layout. Feel free to run it through VoiceOver or whatever screen reading software you have access to.

Yes, that example looks very much like a typical website layout, but it’s crafted solely with a table. You can see how quickly it becomes bloated and inaccessible the very moment we start using it for anything other than tabular data.

So after more than 20 years of being put through the ringer, you might think we should avoid tables altogether. If you’ve never shipped a table-based layout, you’ve undoubtedly heard war stories from those of us who have, and those stories are never kind. It’s like we’ve sort of made tables the “Internet Explorer of HTML elements.”

But that’s not totally fair because tables do indeed fill a purpose on the web and they are indeed accessible when they are used correctly.

Tables are designed to handle data that is semantically related and is best presented in a linear-like format. So, yes, we can use tables today in the year 2020, and that will likely continue to be true many years from now.

Here’s a table being used to display exactly what it’s intended to: tabular data!

With the push toward web standards in the early 2000s, tables were pushed aside as a layout solution in favor of other approaches, most notably the CSS float property. Designers and developers alike rejoiced because, for the first time, we had a true separation of concerns that let markup do the markup-y things it needs to do, and CSS to do the visual stuff it needs to do. That made code both cleaner and way easier to maintain and, as a result, we could actually focus on true standards, like accessibility, and even other practices, like SEO.

See (or rather hear) the difference in this example?

Many of us have worked with floats in the past. They were originally designed to allow content to flow around images that are floated either to the left or right, and still be in the document flow. Now that we’ve gotten newer layout features — again, like grid and flexbox — floats, too, have sort of fallen by the wayside, perhaps either because there are better ways to accomplish what they do, or because they also got the same bad rap as tables after being (ab)used for a long time.

But floats are still useful and relevant! In fact, we have to use them for the shape-outside property to work.

A legitimate float use case could be for wrapping content around a styled <blockquote>.

CSS features like grid, flexbox, and multicolumn layouts are among the wonderful tools we have to work with these days. With even more layout possibilities, cleaner and more accessible code, they will remain our go-to layout approaches for many years to come.

No hacks or extra code in this flexbox example of the same layout we’ve looked at throughout this article:

So, next time you find yourself considering tables or floats, reach for them with confidence! Well, when you know the situation aligns with their intended use. It’s not like I’m expecting you to walk away from this with a reinvigorated enthusiasm for tables and floats; only that, when used correctly, they are perfectly valid techniques, and even continue to be indispensable parts of our overall toolset.

The post In Defense of Tables and Floats in Modern Day Development appeared first on CSS-Tricks.

Here’s a fabulous CSS trick from Bradley Taunt in which he shows how to make tables work on mobile with just a little bit of extra code. He styles each table row into a card that looks something like this:

(Make sure to grab the Pen and make it a bit smaller to see how the design works responsively.)

How does he make that card effect? He uses flexbox on smaller screens and sets the span elements to reveal themselves.

However! I’m not a big fan of those spans. They’re hidden on larger screen sizes but the markup is still there, so it doesn’t feel particularly clean to me. I was working on a project a little while ago where we stumbled on the same problem. We decided to use data attributes on each td instead, like this:

Then we can grab that data attribute in our styles and render it on the page in a pseudo element:

From there we absolutely position the pseudo element to the side and only show it on smaller screens with a media query. I’m uncertain about the accessibility implications of this but it just feels a bit easier to read and understand in my opinion.

Either way, I think this post is a great reminder about all the tricky issues that pop up once you start using tables. There’s so many ways to handle things responsively and those decisions should entirely be made on the context of the design.

When you need to compare data up and down columns, it's probably best to largely leave the table structure alone and allow scrolling.

If each row can be broken apart and still be useful, collapsing them to avoid scrolling is nice.https://t.co/zeMFdrwU1M pic.twitter.com/3z8hQDvNAZ