Some Links on AI-Related Stuff

Every so often, I find that the links I save to read later fall into natural groups or patterns that reveal common threads of interest. The past couple of weeks have produced a lot of thoughts about ChatGPT, an AI-powered interface that responds to requests in a chat-like exchange. Sorta like a “Hey Siri” request, but in a Discord channel.

ChatGPT is just one of several AI-flavored tech, including GitHub’s CoPilot (writing code) and Dall-E (generative images and art).

Is it the end of human development? A new and exciting way to produce art? Just cocktail party conversation fodder? There are lots of opinions…

Dall-E, I want a photo of a developer sitting at a desk with his head exploding while having a chat conversation on a desktop computer with an artificial intelligence algorithm.

Not bad, not bad.

Some Links on AI-Related Stuff originally published on CSS-Tricks, which is part of the DigitalOcean family. You should get the newsletter. 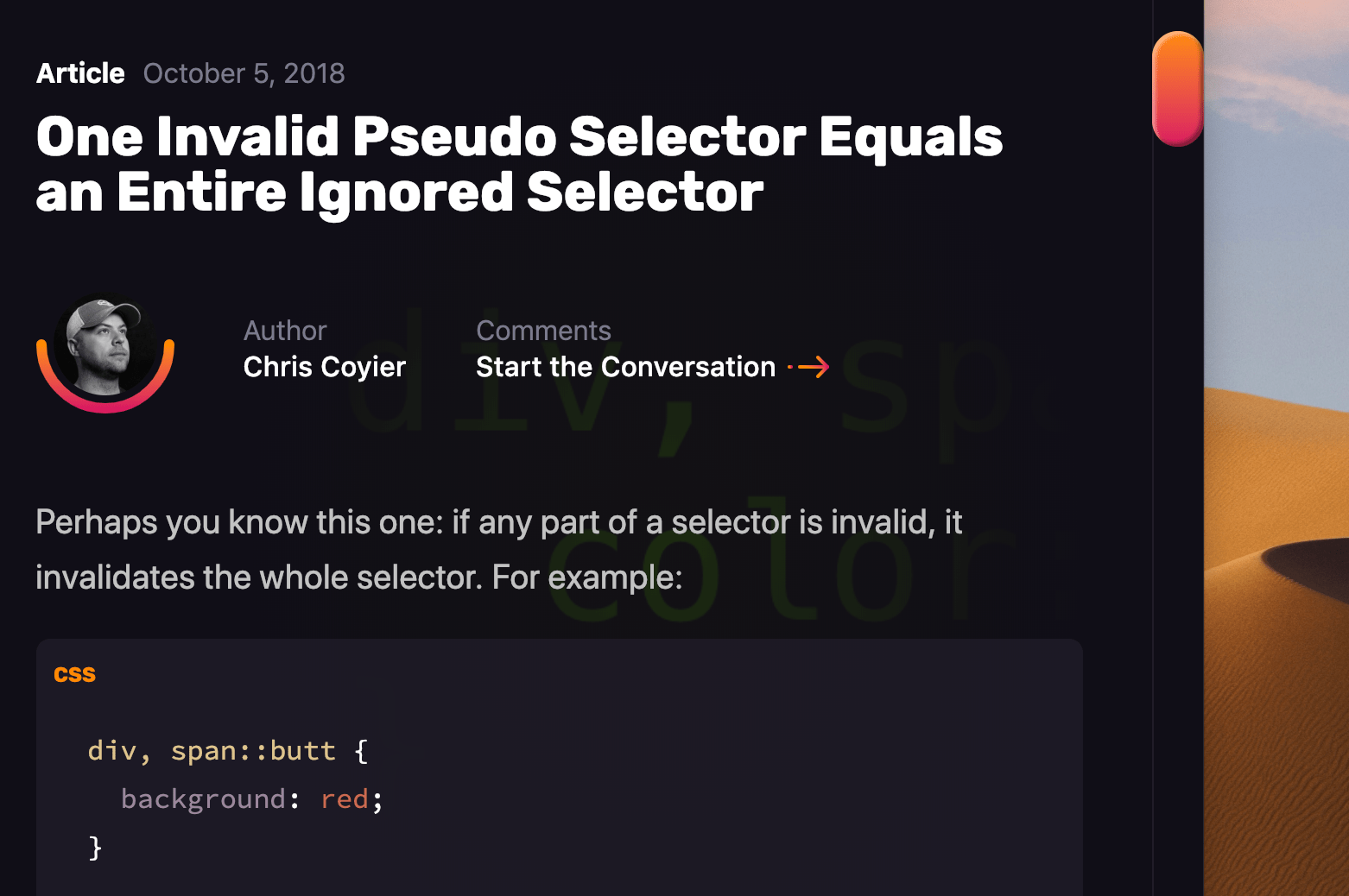 Strut Your Stuff With a Custom Scrollbar

The first time I had my breath taken away by a humble scrollbar was on this very site. When CSS-Tricks v17 rolled out with its FAT CHONKY BOI, my jaw dropped.

I didn’t know you could do that on a professional site. And it would look… good?!

I appreciated so much about it—the gentle gradient, the reckless rounding, the blended background, the sheer satisfying CHONKINESS that dares you to click and wiggle it up and down just to marvel in its tactile heft. How bold! How avant-garde! What sheer, accessible, gracefully degrading delight!

Of course, because fun doesn’t last, the current CSS Tricks scrollbar is more grown-up and muted, light gray on black. Still on brand, still flexing subtle gradient muscle, but not so distracting that it detracts from the reading experience. In our ultra-functional world of MVPs and 80/20 rules, maximizing efficiency and hacking productivity, custom scrollbars evince something about craftsmanship. It says with no words what you can’t in a hundred.

Thanks to some standardization (with more on the way), the API is simple: seven pseudo-elements and eleven pseudo-classes that target (almost) every imaginable component and state of the trusty (and often overlooked) scrollbar. Sounds like a lot, but you can go very far with just three of them:

From here, it works like any other selected element, so bring your full bag of single div CSS tricks! Media queries work! Background gradients work! Transparency works! Margins with all manner of CSS units work! (Not everything works… I’d love to style cursor on my scrollbars for that authentic GeoCities look). I tried it out on my site with Lea Verou’s stash of CSS background gradients (my stash of stashes is here) and ended up with an atrocious combo of stripy barber pole (💈) for the thumb element and transparent hearts for the track. But it was most definitely mine—so much so that people have taken to calling it the “swyxbar” when I implemented a subtler version at work.

Every front-end developer should take this too far at least once in their careers. Live dangerously! Break the rules! Rage against the user agent! And maybe don’t ship scrollbars that break user expectations on a mass-market product (like Google Wave did back in the day)!

Over at the JS Party poundcast:

[Kend C. Dodds]: […] ask anybody who’s done regular, old CSS and they’ll tell you that “I don’t know if it’s okay for me to change this, so I’m gonna duplicate it.” And now we’ve got – at PayPal (this is not made up) we had 90% unused CSS on the project I was using, because everybody was afraid to touch the old stuff. So we just duplicated something new and called it something else. And you might just say that we’re bad at CSS, but maybe CSS was bad at us, I don’t know… [laughter]

[Emma Bostain]: Well, that’s why styled-components and CSS-in-JS was so pivotal; it was like “Oh, hey, we can actually encapsulate all of this logic inside the component that it’s touching and don’t have to worry about bleeding code anymore.” It’s so much easier to delete things, and add things, and all of those things.

[Kend C. Dodds]: Yeah, you’re precisely right. That was the problem that those things were made to solve.

I’ve heard this exact story before several times, usually from large companies. Lots of developers, typical developer turnover… nobody knows what CSS is actually used and what isn’t because that is a very hard problem.

That’s one of the reasons I sometimes like component-based-styling solutions (CSS-in-JS, if you’re nasty). Not because I love complex tooling. Not because I like JavaScript syntax better than CSS. Because of the co-location of styles and componentry. Because nobody is afraid of the styles anymore — they are tightly coupled to what they are styling. It’s not needed on every project, but if you’re building with components anyway (an awfully nice way to architect front-ends that doesn’t require JavaScript), you might as well style this way.

For this reason, I’m excited that “scoped styles” are making a bit of a comeback in standards discussions.

I remember an ancient idea (that maybe even shipped in browsers for a minute?) where you’d just chuck a <style scoped> block right in the HTML and whatever the parent was, the styles were scoped to that parent. That was so cool, I wish we could have that again.

But it seems like the newer stuff (here’s Miriam’s original proposal) has some more clever stuff that that basic concept doesn’t cover — like being able to set a lower-boundary in addition to an upper-boundary, making it possible to scope “donut-shaped” styles in the DOM (a Nicole Sullivan term). Whatever happens, shadow DOM-free scoped styles with zero tooling is huge.

The post “We had 90% unused CSS because everybody was afraid to touch the old stuff” appeared first on CSS-Tricks. You can support CSS-Tricks by being an MVP Supporter.

“We, afraid, because, everybody, Stuff, touch, Unused
[Top] 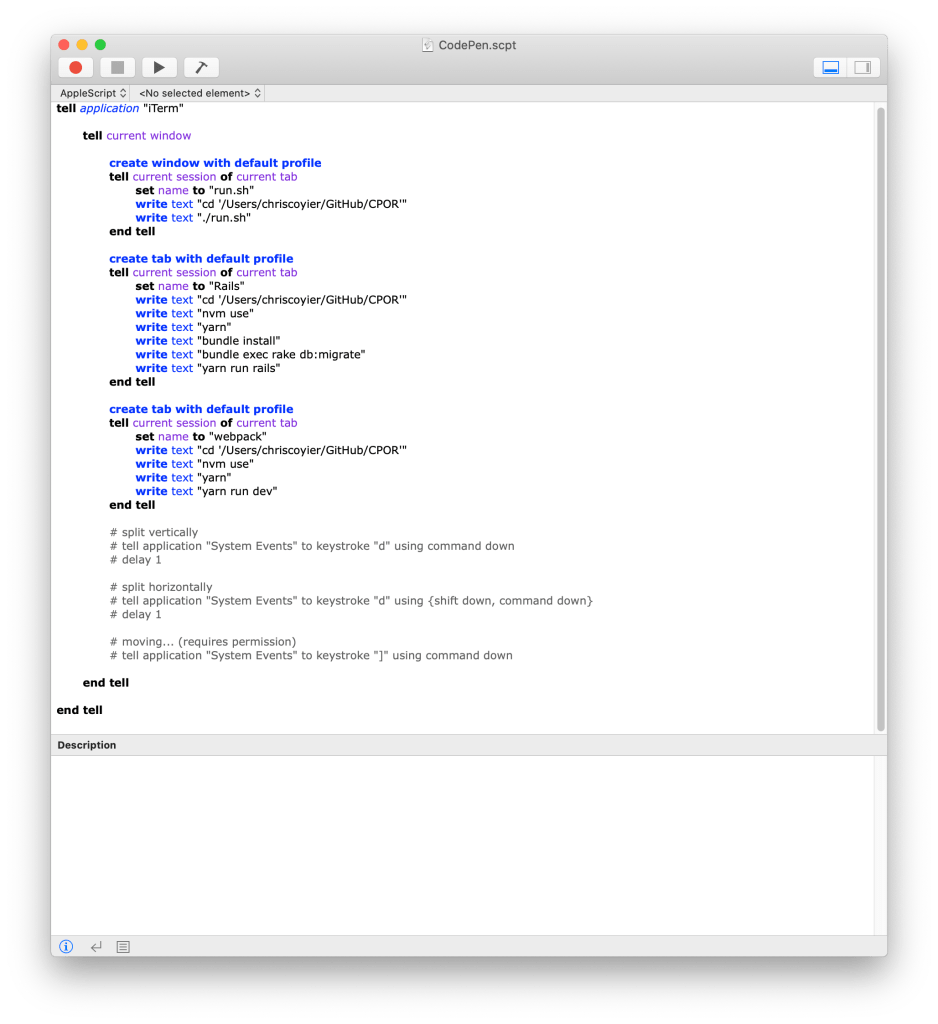 Many development environments require running things in a terminal window. npm run start, or whatever. I know my biggest project requires me to be running a big fancy Docker-based thing in one terminal, Ruby on Rails in another, and webpack in another. I’ve worked on other projects that require multiple terminal windows as well, and I don’t feel like I’m that unusual. I’ve heard from several others in this situation. It’s not a bad situation, it’s just a little cumbersome and annoying. I’ve got to remember all the commands and set up my command line app in a way that feels comfortable. For me, splitting panels is nicer than tabs, although tabs for separate projects seems OK.

I asked the question on Twitter, of course. I figured I’d compile the options here.

Being a Mac guy, I was most interested in solutions that would work with iTerm since I’ve used that anyway. In lieu of a built-in iTerm solution, I did learn it was “scriptable.” Apparently, they are sunsetting AppleScript support in favor of Python but, hey, for now it seems to work fine.

I just open that script, hit run, and it does the job. I left the comments in there because I’d like to figure out how to get it to do split screen the way I like, rather than tabs, but I got this working and then got lazy again. It felt weird to have to use keystrokes to have to do it, so I figured if I was going to dig in, I’d figure out if their newer Python stuff supports it more directly or what. It’s also funny I can’t like compile it into a little mini app or something. Can’t Automator do that? Shrug.

The other popular answer I got for Mac folks is that they have Alfred do the work. I never got into Alfred, but there clearly is fancy stuff you can do with it.

Laura Kalbag wrote How to read RSS in 2020. This would be a nice place to send someone curious about RSS: what it is, what it’s for, and how you can start using it as a reader. I like this callout, too:

Sometimes the content is just an excerpt, encouraging you to read the rest of the content on the original site. I think this defeats the point of providing RSS, where a big benefit is that the reader can customise how the posts display in their feed reader to improve their reading experience.

I absolutely love Khoi Vinh’s writing, but have long been surprised that his feed is truncated. Barely even excerpts. WHY KHOI WHY?!

Laura linked up lire as a reader, and I’d never seen that one before. It’s apparently got good screenreader support.

Louis Lazaris wrote Front-end RSS Feeds (2020 Edition). It has OPML files that are in big groups of feeds that you’ll be subscribed to once their imported into a feed reader (some have that as an option). There is also just a big list too.

I’m still on my Feedbin + NetNewsWire kick. NetNewsWire for iOS just dropped as well. I installed it and like it OK so far, but I think I still prefer Reeder on iOS which also syncs with Feedbin nicely.

I haven’t had a chance to play with Unread 2 yet for iOS, but I love the idea that it “automatically determines which feeds contain only article summaries” and goes and fetches the rest of the content from the site for you.