Layoutit Grid is an interactive open source CSS Grid generator. It lets you draw your designs and see the code as you go. You can interact with the code, add or remove track lines and drag them around to change the sizing — and you get to see the CSS and HTML change in real time!

When you are done with a layout, you can create a CodePen or grab the code to jumpstart your next project. The tool brings the code to the forefront, helping you learn CSS grid as you work directly with it.

CSS Grid is a whole new way of thinking about layouts

We can now create robust responsive layouts for our web experiences. We can finally learn to design with a coherent set of layout tools instead of memorizing piles of hacks to force elements into position.

Now, I’m not saying a generator like this excuses us from knowing the code we write. We should all learn how CSS Grid and Flexbox work. Even if your stronghold is JavaScript, having a solid foundation in CSS knowledge is a powerful ally when communicating your ideas. When sharing a prototype for a component, a UX interaction, or even an algorithm in an online sandbox, the way in which your work is presented can make a big the difference. The ability to develop proper layouts — and define the styles that create them — is fundamental.

Crafting layouts in CSS should not be a daunting task. CSS Grid is actually quite fun to use! For example, using named grid areas feels like an ASCII art version of drawing a design on a piece of paper. Lets create the layout of a photos app, a feed of pics and the people in them side by side for its main content and the typical header, footer and a config sidebar.

This is just a small subset of what you can build with CSS Grid. The spec is quite flexible. Areas can also be placed directly using line numbers or names, or they can be placed implicitly by the browser, with the content distributed inside the grid automatically. And the spec continues to grow with additions, like subgrid.

At the same time, working with grids can be difficult, just like anything that requires a new way of thinking. It takes a lot of time to wrap our heads around this sort of thing. And one way to help do that is to…

When you are learning CSS Grid, it is easy to feel intimidated by its notation and semantics. Until you develop some muscle memory for it, kickstarting the learning process with visual and interactive tools can be an excellent way to overcome that early trepidation. A lot of us have used generators while learning how to create shadows, gradients, Markdown tables, and so on. Generators, if built with care, are great learning aids.

Let’s use Layoutit Grid to recreate the same design in our example.

Generators like this aren’t meant to be leaned on forever; they’re a stepping stone. This particular one helps you experience the power of CSS Grid by materializing your designs in a few clicks along with the code to make it happen. This gives you the early wins that you need to push forward with the learning process. For some of us, generators permanently remain in our toolboxes. Not because we do not know how to craft the layouts by hand, but because having the visual feedback loop help us to quickly convert our ideas into code. So we keep playing with them.

Sarah Drasner has also created a CSS Grid generator that’s worth checking out as well.

If you have ideas to improve the tool, get in touch! Open an issue and let’s discuss it on GitHub. Going into meta territory, you can also learn about the CSS Grid spec by helping us build the tool.

We use the app to keep track of best practices in creating performant interactive web experiences. It is now powered by the newly released Vue 3 using <script setup> components and built with Vite, a new dev tool that doesn’t bundle the app while developing, which gives us instant feedback during development. If you are curious and want to build with us, fork the repo and let’s learn together!

I’ve had to implement the same hero for several years now, so like a good lazy programmer, I figured I’d automate it.

The post The Hero Generator appeared first on CSS-Tricks. 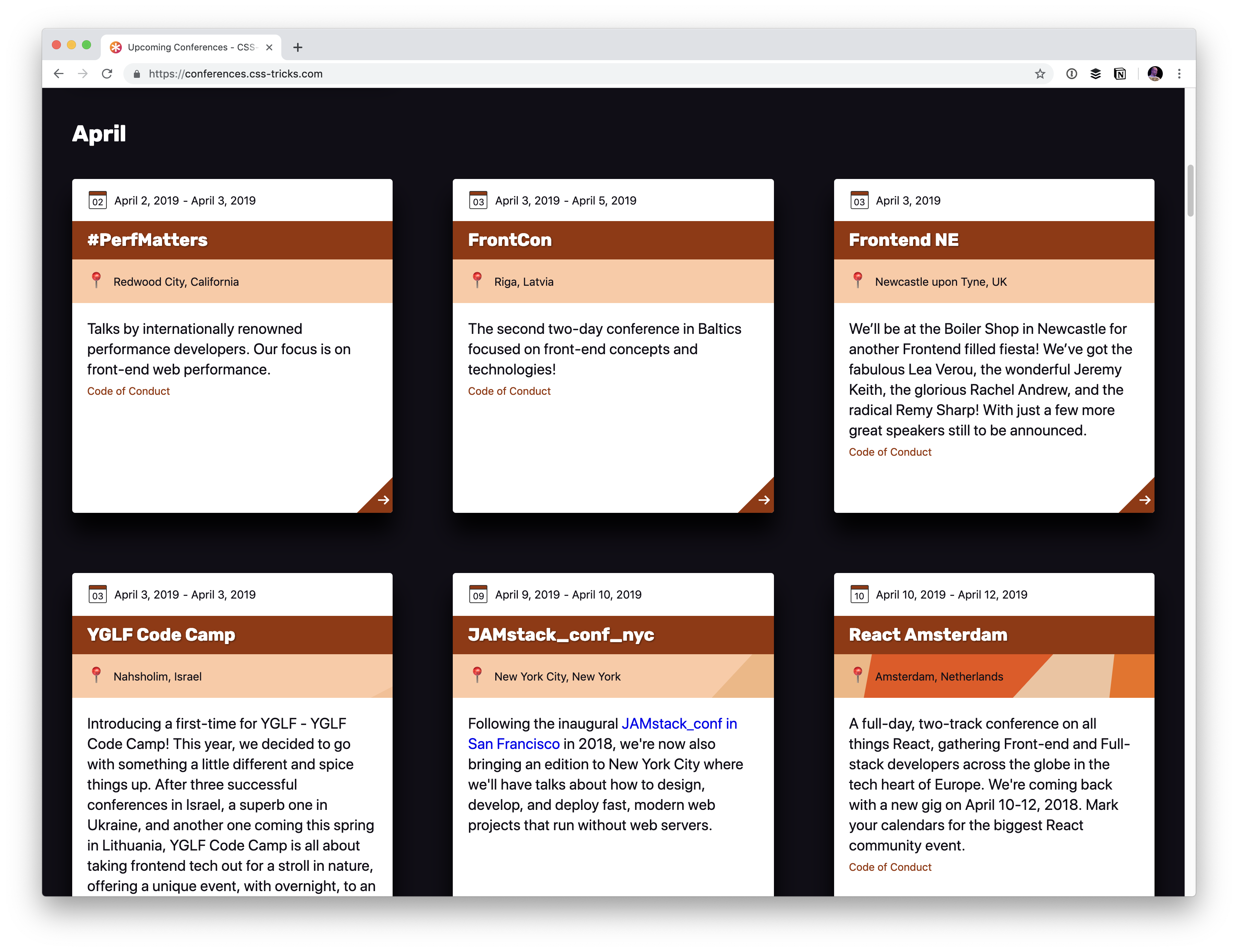 Little confession here: when I first saw Netlify CMS at a glance, I thought: cool, maybe I’ll try that someday when I’m exploring CMSs for a new project. Then as I looked at it with fresh eyes: I can already use this! It’s a true CMS in that it adds a content management UI on top of any static site generator that works from flat files! Think of how you might build a site from markdown files with Gatsby, Jekyll, Hugo, Middleman, etc. You can create and edit Markdown files and the site’s build process runs and the site is created.

Netlify CMS gives you (or anyone you set it up for) a way to create/edit those Markdown files without having to use a code editor or know about Pull Requests on GitHub or anything. It’s a little in-browser app that gives you a UI and does the file manipulation and Git stuff behind the scenes.

Our conferences website is a perfect site to build with a static site generator.

It’s on GitHub, so it’s open to Pull Requests, and each conference is a Markdown file.

That’s pretty cool already. The community has contributed 77 Pull Requests already really fleshing out the content of the site, and the design, accessibility, and features as well!

I used 11ty to build the site, which works great with building out those Markdown files into a site, using Nunjucks templates. Very satisfying combo, I found, after a slight mostly configuration-related learning curve.

But as comfortable as you or I might be with a quick code edit and Pull Request, not everybody is. And even I have to agree that going to a URL quick, editing some copy in input fields, and clicking a save button is the easiest possible way to manage content.

That CMS UI is exactly what Netlify CMS gives you. Wanna see the entire commit for adding Netlify CMS?

Cutting to the chase here, once it is installed, I now have a totally customized UI for editing the conferences on the site available right on the production site.

Netlify CMS doesn’t do anything forceful or weird, like attempt to edit the HTML on the production site directly. It works right into the workflow in the same exact way that you would if you were editing files in a code editor and committing in Git.

You use Netlify CMS on your production site, which means you need authentication so that just you (and the people you want) have access to it. Netlify Identity makes that a snap. You just flip it on from your Netlify settings and it works.

The Git magic happens through a technology called Git Gateway. You don’t have to understand it (I don’t really), you just enable it in Netlify as part of Netlify Identity, and it forms the connection between your site and the Git repository.

Now when you create/edit content, actual Markdown files are created and edited (and whatever else is involved, like images!) and the change happens right in the Git repository.

I made this the footer of the site cause heck yeah.