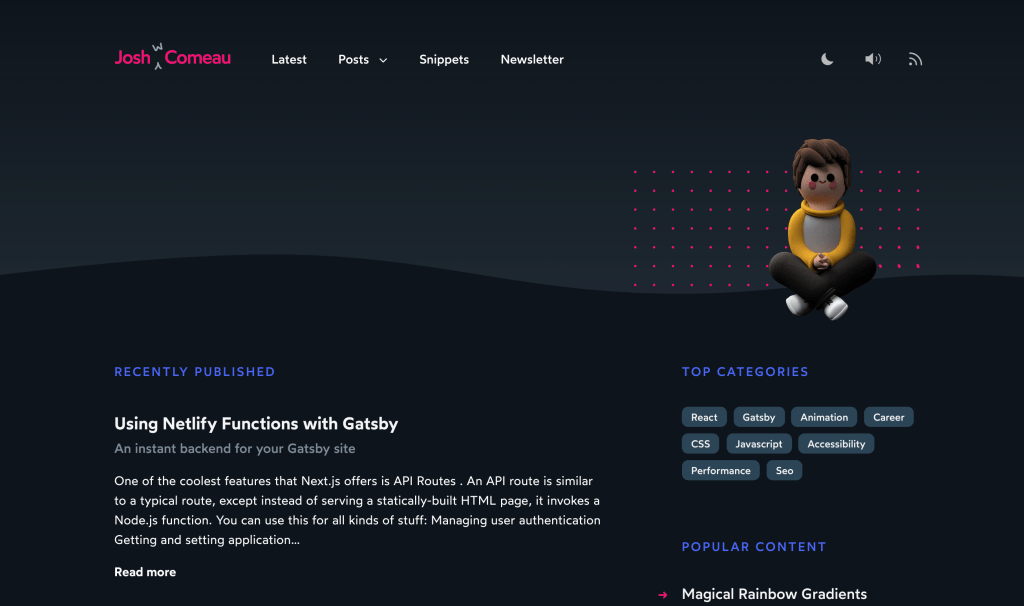 The other day I was doom-scrolling twitter, and I saw a delightful article titled “The Case for Fussy Breakfasts.” I love food and especially breakfast, and since the pandemic hit I’ve been using my breaks in between meetings (or sometimes on meetings, shh) to make a full bacon, poached egg, vegetable plate, so I really got into the article. This small joy of creating a bit of space for myself for the most important meal of the day has been meaningful to me — while everything else feels out of control, indulging in some ceremony has done a tiny part to offset the intensity of our collective situation.

It caused me to think of this “fussiness” as applied to other inconsequential joys. A walk. A bath. What about programming?

While we’re all laser-focused on shipping the newest feature with the hottest software and the best Lighthouse scores, I’ve been missing a bit of the joy on the web. Apps are currently conveying little care for UX, guidance, richness, and — well, for humans trying to communicate through a computer, we’re certainly bending a lot to… the computer.

I’m getting a little tired of the web being seen as a mere document reader, and though I do love me a healthy lighthouse score, some of these point matrixes seem to live and die more by our developer ego in this gamification than actually considering what we can do without incurring much weight. SVGs can be very small while still being impactful. Some effects are tiny bits of CSS. JS animations can be lazy-loaded. You can even dazzle with words, color, and layout if you’re willing to be a bit adventurous, no weight at all!

A few of my favorite developer sites lately have been Josh Comeau, Johnson Ogwuru and Cassie Evans. The small delights and touches, the little a-ha moments, make me STAY. I wander around the site, exploring, learning, feeling actually more connected to each of these humans rather than as if I’m glancing at a PDF of their resume. They flex their muscles, show me the pride they have in building things, and it intrigues me! These small bits are more than the fluff that many portray any “excess” as: they do the job that the web is intending. We are communicating using this tool- the computer- as an extension of ourselves.

Nuance can be challenging. It’s easy as programmers to get stuck in absolutes, and one of these of late has been that if you’re having any bit of fun, any bit of style, that must mean it’s “not useful.” Honestly, I’d make the case that the opposite is true. Emotions attach to the limbic system, making memories easier to recall. If your site is a flat bit of text, how will anyone remember it?

Don’t you want to build the site that teams in companies the world over remember and cite as an inspiration? I’ve been at four different companies where people have mentioned Stripe as a site they would aspire to be like. Stripe took chances. Stripe told stories. Stripe engaged the imagination of developers, spoke directly to us.

I’m sad acknowledging the irony that after thinking about how spot on Stripe was, most of those companies ignored much of what they learned while exploring it. Any creativity, risk, and intention was slowly, piece by piece, chipped away by the drumbeat of “usefulness,” missing the forest for the trees.

When a site is done with care and excitement you can tell. You feel it as you visit, the hum of intention. The craft, the cohesiveness, the attention to detail is obvious. And in turn, you meet them halfway. These are the sites with the low bounce rates, the best engagement metrics, the ones where they get questions like “can I contribute?” No gimmicks needed.

What if you don’t have the time? Of course, we all have to get things over the line. Perhaps a challenge: what small thing can you incorporate that someone might notice? Can you start with a single detail? I didn’t start with a poached egg in my breakfast, one day I made a goofy scrambled one. It went on from there. Can you challenge yourself to learn one small new technique? Can you outsource one graphic? Can you introduce a tiny easter egg? Say something just a little differently from the typical corporate lingo?

If something is meaningful to you, the audience you’ll gather will likely be the folks that find it meaningful, too.