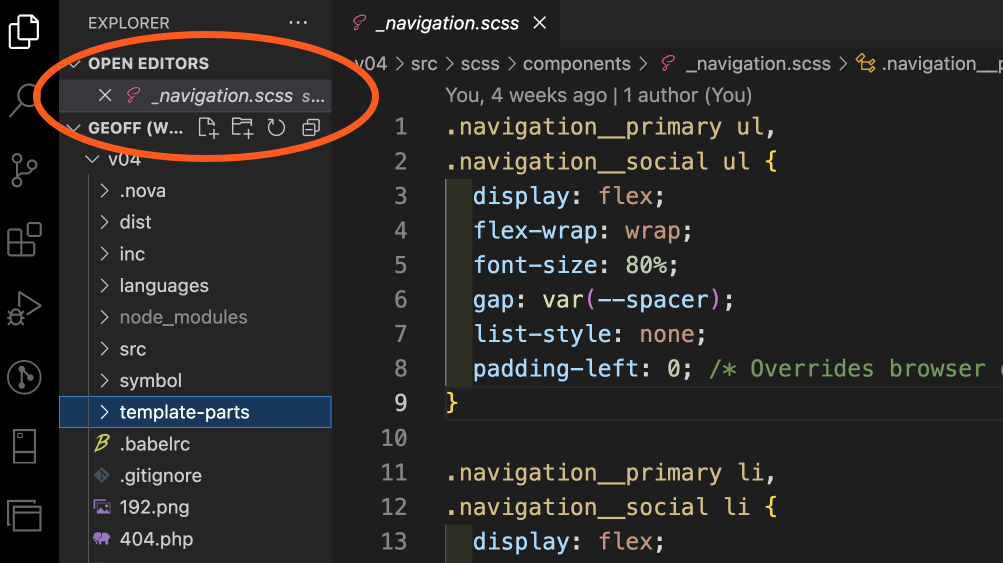 If you use VS Code, you might have enabled the setting for re-opening a previously open file next time the app launches. I do. I like that.

But sometimes you really, really don’t want that to happen.

I recently ran into one of those times! I had to reinstall my local copy of this site and, with it, the 3GB+ database that accompanies it. Being a WordPress site and all, I needed to open up the SQL database file to search-and-replace some stuff.

If you’ve ever tried to open a super duper large file in VS Code, then you know you might need to jiggle a few settings that increase the memory limit and all that. The app is super flexible like that. There’s even a nice extension that’ll both increase the memory and perform a search-and-replace on open.

Anyway, that big ol’ database file crashed VS Code several times and I wound up finding another way to go about things. However, VS Code keeps trying to open that file and inevitably crashes even though I nuked the file. And that means I wait for the MacOS beachball of fun to spin around before the app crashes and I can reopen it again for reals.

Well, I finally decided to fix that today and spent a little time searching around. One Stack Overflow thread suggests disabling extensions and increasing the memory limit via the command line. I’m glad that worked for some folks, but I had to keep looking.

Another thread suggests clearing the app’s cache from the command palette.

I wound up going with a scorched earth strategy shared by Jie Jenn in a helpful YouTube video. You’ve gotta manually trash the cached files from VS Code. The video walks through it in Windows, but it’s pretty darn similar in MacOS. The VS Code cache is located in your user folder.

Notice that I have the Backups folder highlighted there. Jie removed the files from the CachedData folder, but all that did was trigger a prompt for me to re-install the app. So, I took a risk and deleted what appeared to be a 3GB+ file in Backups. I showed that file the door and VS Code has been happy ever since.

Ask me again in a week and maybe I’ll find out that I really screwed something up. But so far, so good!

Quick Tip: Clear VS Code Cache for Open Files originally published on CSS-Tricks, which is part of the DigitalOcean family. You should get the newsletter.

Netlify Does Cache Invalidation For You

This is one of my favorite Netlify features. Say you’re working on a site and you change as asset like a CSS, JavaScript, or image file. Ya know, like do our job. On Netlify, you don’t have to think about how that’s going to play out with deployment, browsers, and cache. Netlify just handles it for you.

Netlify calls this Instant Cache Invalidation, part of the “rocketjuice” of Netlify.

On all the sites I work on that aren’t on Netlify, I do have to think about it (ugh). If you look at this very websites source, you’ll see a link to a stylesheet something like this:

See that ?cache_bust= stuff at the end of the stylesheet URL? Those are just gibberish characters I put into that URL manually (based on a Date() call) so that when I push a change to the file, it breaks both the CDN and people’s own browser cache and they get the new file. If I didn’t do that, the changes I push won’t be seen until all the cache expires or is manually removed by users, which is… bad. I might be fixing a bug! Or releasing a new feature! It’s extra bad because that CSS might go along with some HTML which doesn’t cache as aggressively and could lead to a mismatch of HTML and expected CSS.

I work on some sites where I change that cache-busting string by hand because I’m too lazy to automate it. Usually, I do automate it though. I recently shared my Gulpfile which I hand-wrote, and part of which deals with this cache-busting. It is work to write, work to maintain, and work to use during development. You can even read the comments on that post and see other people’s strategies for doing the same thing that are different than how I do it. Errrrrrybody be cache-busting.

Again, you change an asset, push it up, Netlify knows it’s changed and does all the cache busting for you. So your stylesheet can be linked up like:

The post Netlify Does Cache Invalidation For You appeared first on CSS-Tricks.

You should for sure be setting far-out cache headers on your assets like CSS and JavaScript (and images and fonts and whatever else). That tells the browser “hang on to this file basically forever.” That way, when navigating from page to page on a site — or revisiting it, or refreshing the page — the browser doesn’t have to download it again which produces way faster page loads. It’s massively important for web performance, so do it!

But how do you force the browser to get a fresh version of the file? Well, there are a bunch of ways. Check out that blog post for more. But here’s one that I’ve used just recently that I wanted to document.

The trick is to change the query string

So, one day you ship it like this in your HTML:

Then you change that query string to break the cache when you need to:

The HTML, by the way, is either not cached or cached for a much shorter amount of time, so changes to HTML will be seen.

I sometimes do it by hand

For many years, I busted cache on this very site by setting a PHP variable and using it to break assets, like…

Hey that works, but it was me hand-manipulating that variable. I would sometimes forget to do it, and even if I did remember, I sort of resented having to do it.

I’m using a Gulp-powered build process at the moment on this site, which does all the classic stuff: Sass, Babel, file concatenation, live reloading…

It occurred to me I might as well have Gulp do the query-string changing whenever changes are made to CSS or JavaScript. JavaScript has a .replace() method, and that’s available in Node/Gulp easily with the gulp-replace plugin.

I make a task. When I call it, it looks in my header filer for the string cache_bust= plus some value, and replaces it with a new randomized string based on the date and time.

I do the same thing in a separate task when JavaScript files are editing and compiled.

I’ll get to it eventually. Sometimes you just gotta baby-step your way to better solutions over time.

This is just one way! There are other Gulp plugins just for this. Other build systems have different approaches. This approached happened to work well for me and my exact needs at the time. Feel free to share your strategy!