And it was released yesterday! The big news for us in CSS Land is that the new release supports the aspect-ratio property. This comes right on the heels of Safari announcing support for it in Safari Technology Preview 118, which released January 6. That gives us something to look forward to as it rolls out to Edge, Firefox and other browsers.

Here’s the release video skipped ahead to the aspect-ratio support:

For those catching up:

Seems like now is a good time to start brushing up on it!

The post New in Chrome 88: aspect-ratio appeared first on CSS-Tricks.

`aspect-ratio` is going to deprecate FitVids

Jen was just tweetin’ about how the latest Safari Technical Preview has aspect-ratio. Looks like Chrome and Firefox both have it behind a flag, so with Safari joining the party, we’ll all have it soon.

I played with it a while back. It’s awesome and much needed. There are ways to make `aspect-ratio` boxes, but they largely revolve around “padding hacks.”

Dave is excited about being released from jail:

Once we can rely on it, FitVids (which I use on literally every site I make in one form or another) can entirely go away in favor of a handful of CSS applied directly to the elements (usually videos-in-<iframe>s).

The post `aspect-ratio` is going to deprecate FitVids appeared first on CSS-Tricks. 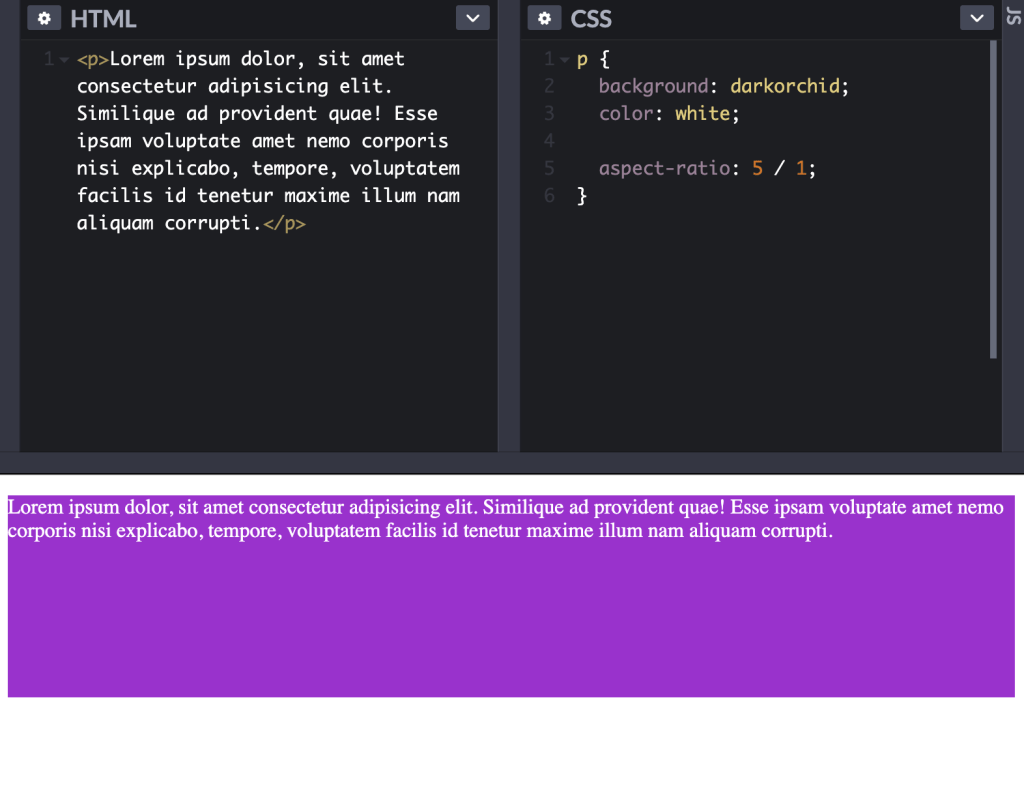 A First Look at `aspect-ratio`

Oh hey! A brand new property that affects how a box is sized! That’s a big deal. There are lots of ways already to make an aspect-ratio sized box (and I’d say this custom properties based solution is the best), but none of them are particularly intuitive and certainly not as straightforward as declaring a single property.

So, with the impending arrival of aspect-ratio (MDN, and not to be confused with the media query version), I thought I’d take a look at how it works and try to wrap my mind around it.

Shout out to Una where I first saw this. Boy howdy did it strike interest in folks:

Just dropping aspect-ratio on an element alone will calculate a height based on the auto width.

Without setting a width, an element will still have a natural auto width. So the height can be calculated from the aspect ratio and the rendered width.

If the content breaks out of the aspect ratio, the element will still expand.

The aspect ratio becomes ignored in that situation, which is actually nice. Better to avoid potential data loss. If you prefer it doesn’t do this, you can always use the padding hack style.

If the element has either a height or width, the other is calculated from the aspect ratio.

So aspect-ratio is basically a way of seeing the other direction when you only have one (demo).

If the element has both a height and width, aspect-ratio is ignored.

The combination of an explicit height and width is “stronger” than the aspect ratio.

Factoring in min-* and max-*

There is always a little tension between width, min-width, and max-width (or the height versions). One of them always “wins.” It’s generally pretty intuitive.

It looks like that general intuitiveness carries on here: the min-* and max-* properties will either win or are irrelevant. And if they win, they break the aspect-ratio.

Aspect ratios are always most useful in fluid situations, or anytime you essentially don’t know one of the dimensions ahead of time. But even when you don’t know, you’re often putting constraints on things. Say 50% wide is cool, but you only want it to shrink as far as 200px. You might do width: max(50%, 200px);. Or constrain on both sides with clamp(200px, 50%, 400px);.

This seems to work inutitively:

But say you run into that minimum 200px, and then apply a min-width of 300px? The min-width wins. It’s still intuitive, but it gets brain-bending because of how many properties, functions, and values can be involved.

Maybe it’s helpful to think of aspect-ratio as the weakest way to size an element?

It will never beat any other sizing information out, but it will always do its sizing if there is no other information available for that dimension.

The post A First Look at `aspect-ratio` appeared first on CSS-Tricks.

Andrew Welch had a little CSS challenge the other day to make an ordinary div:

There’s a video in that tweet if it helps you visualize the challenge. I saw Paul Bakaus blogging about this the other day, too, so it’s a thing that comes up!

Mark Huot got fancy applying aspect ratios directly with width/height and creating the margins from subtracting from those dimensions:

Amelia Wattenberger‘s idea is to set both height/width and max-height/max-width with viewport units, and center it with the classic translate trick:

Eric A. Meyer did the same, only centered with flexbox instead.

Brian Hart used vmin units for the aspect ratio sizing and centered it with flexbox:

Benoît Rouleau did the same but used calc() for the margins in a different unit.

Andrew really likes Jonathan Melville’s approach. Most of it is in Tailwind classes so it’s a smidge hard for me to understand as I’m not used to looking at code like that yet.

Andrew said he ultimately went with the vmin thing — although I see he’s using calc() to subtract vmin units from each other which isn’t really necessary unless, I guess, you wanna see the math.

The post Centering a div That Maintains Aspect-Ratio When There’s Body Margin appeared first on CSS-Tricks.

What if we got aspect-ratio sized images by doing almost nothing?

Say you have an image you’re using in an <img> that is 800×600 pixels. Will it actually display as 800px wide on your site? It’s very likely that it will not. We tend to put images into flexible container elements, and the image inside is set to width: 100%;. So perhaps that image ends up as 721px wide, or 381px wide, or whatever. What doesn’t change is that images aspect ratio, lest you squish it awkwardly (ignoring the special use-case object-fit scenario).

So—we don’t know how much vertical space an image is going to occupy until that image loads. This is the cause of jank! Terrible jank! It’s everywhere and it’s awful.

There are ways to create aspect-ratio sized boxes in HTML/CSS today. None of the options are particularly elegant, relying on the “hack” of setting a zero height and pushing the boxes height with padding. Wouldn’t it be nicer to have a platform feature to help us here? The first crack at fixing this problem that I know about is an intrinsicsize attribute. Eric Portis wrote about how this works wonderfully in Jank-Free Image Loads.

This is currently behind a flag in Chrome 71+, and it really does help solve this problem.

The intrinsicsize property is brand new. It will only help on sites where the developers know about it and take the care to implement it. And it’s tricky! Images tend to be of arbitrary size, and the intrinsicsize attribute will need to be custom on every image to be accurate and do its job. That is, if it makes it out of standards at all.

There is another possibility! Eric also talked about the aspect-ratio property in CSS as a potential solution. It’s also still just a draft spec. You might say, but how is this helpful? It needs to be just as bespoke as intrinsicsize does, meaning you’d have to do it as inline styles to be helpful. Maybe that’s not so bad if it solves a big problem, but inline styles are such a pain to override and it seems like the HTML attribute approach is more inline with the spirit of images. Think of how srcset is a hint to browsers on what images are available to download and allowing it to pick the best. Telling the browser about the aspect-ratio upfront is similarly useful.

I heard from Jen Simmons about an absolutely fantastic way to handle this: put a default aspect ratio into the UA stylesheet based on the elements existing width and height attributes. Like this:

Let that soak in.

Now if you already have:

It automatically has the correct aspect ratio as the page loads. That’s awesome.

I like the idea of the CSS feature. But I like 100 times more the idea of putting it into the UA stylesheet so that the entire web benefits. Changing a UA stylesheet, I’m sure, is no small thing to consider, and I’m not qualified to understand all the implications of that, but it feels like a very awesome thing at first consideration.

Jen has a ticket open for people to voice their thoughts and links to the bug ticket where Firefox is going to test this out to see how it goes.

The post What if we got aspect-ratio sized images by doing almost nothing? appeared first on CSS-Tricks.