Say you want to build a TODO app with users. Those users will need to sign up and log in. Can’t do that with a static site, right? You can, actually. Netlify helps with Netlify Identity, a robust offering they’ve had for years. Enabling it is just a few clicks in the admin UI, and they even provide auth widgets so you have to build precious little to get this working.

Now you’ve got a website with authentication, great! But how do you keep going with your TODO app? You’ll need some kind of cloud storage for the data on your user’s lists. For that, you’ll have to reach outside of Netlify to find a cloud storage provider you like. Netlify has had a first-class integration with Fauna for years, so that’s a good choice.

You’ll need to communicate with Fauna, of course, and being a static site, JavaScript is how that’s going to work. Fortunately, your client-side JavaScript can communicate with your own server-side JavaScript that Netlify helps with, which is called Netlify Functions. That’s right, Netlify helps you build/deploy Lambda functions. This means you can actually have the Lambda functions do the communicating with Faunda, keeping your API keys safe.

Those are the building blocks. This is a well-worn approach, and really at the heart of Jamstack. Need a head start? Netlify has templates for this kind of thing. Here are some examples with this approach in mind: netlify-fauna-todo-app and netlify-faunadb-example. We even have a tutorial that covers that. And there’s a one-minute video demo:

There you have it, a website that is every bit as dynamic as something you’d build with a traditional server. Only now, you’re building with Netlify meaning you get so many other advantages, like the fact that you’re deploying from commits to a Git repository and getting build previews, and every other amazing feature Netlify offers.

Netlify Identity, a Key Aspect to Jamstack Development originally published on CSS-Tricks. You should get the newsletter and become a supporter. 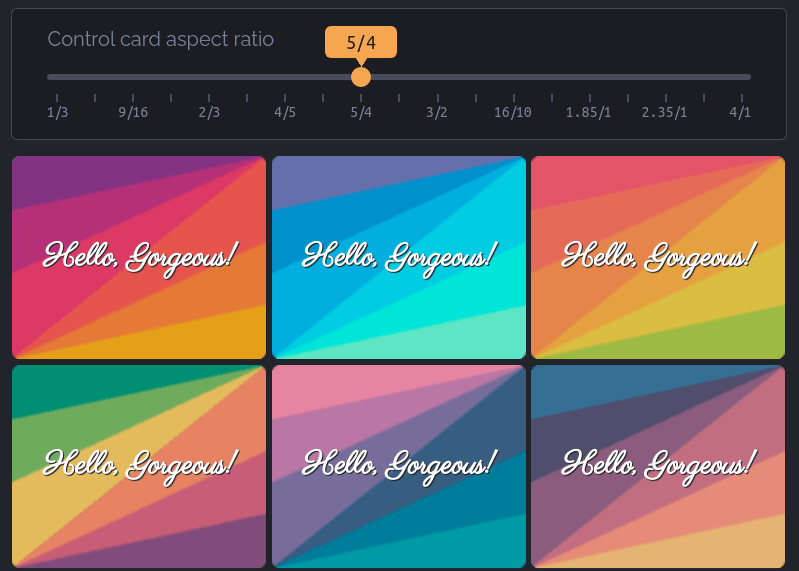 I recently came across an interesting problem. I had to implement a grid of cards with a variable (user-set) aspect ratio that was stored in a --ratio custom property. Boxes with a certain aspect ratio are a classic problem in CSS and one that got easier to solve in recent years, especially since we got aspect-ratio, but the tricky part here was that each of the cards needed to have two conic gradients at opposite corners meeting along the diagonal. Something like this:

The challenge here is that, while it’s easy to make an abrupt change in a linear-gradient() along the diagonal of a variable aspect ratio box using for example a direction like to top left which changes with the aspect ratio, a conic-gradient() needs either an angle or a percentage representing how far it has gone around a full circle.

Check out this guide for a refresher on how conic gradients work.

Putting it into code, we have:

However, no browser currently implements trigonometric and inverse trigonometric functions, so the simple solution is just a future one and not one that would actually work anywhere today.

We can of course compute the --angle in the JavaScript from the --ratio value.

But what if using JavaScript won’t do? What if we really need a pure CSS solution? Well, it’s a bit hacky, but it can be done!

This is an idea I got from a peculiarity of SVG gradients that I honestly found very frustrating when I first encountered.

As it can be seen below, these two don’t give us the same result. While the CSS gradient really is at 45°, the SVG gradient rotated by the same 45° has that sharp transition between orange and red along the diagonal, even though our box isn’t square, so the diagonal isn’t at 45°!

This is because our SVG gradient gets drawn within a 1x1 square box, rotated by 45°, which puts the abrupt change from orange to red along the square diagonal. Then this square is stretched to fit the rectangle, which basically changes the diagonal angle.

Note that this SVG gradient distortion happens only if we don’t change the gradientUnits attribute of the linearGradient from its default value of objectBoundingBox to userSpaceOnUse.

We cannot use SVG here since it only has linear and radial gradients, but not conic ones. However, we can put our CSS conic gradients in a square box and use the 45° angle to make them meet along the diagonal:

Then we can stretch this square box using a scaling transform – the trick is that the ‘/’ in the 3/ 2 is a separator when used as an aspect-ratio value, but gets parsed as division inside a calc():

You can play with changing the value of --ratio in the editable code embed below to see that, this way, the two conic gradients always meet along the diagonal:

Note that this demo will only work in a browser that supports aspect-ratio. This property is supported out of the box in Chrome 88+ (current version is 90), but Firefox still needs the layout.css.aspect-ratio.enabled flag to be set to true in about:config. And if you’re using Safari… well, I’m sorry!

Issues with this approach and how to get around them

Scaling the actual .card element would rarely be a good idea though. For my use case, the cards are on a grid and setting a directional scale on them messes up the layout (the grid cells are still square, even though we’ve scaled the .card elements in them). They also have text content which gets weirdly stretched by the scaley() function.

The solution is to give the actual cards the desired aspect-ratio and use an absolutely positioned ::before placed behind the text content (using z-index: -1) in order to create our background. This pseudo-element gets the width of its .card parent and is initially square. We also set the directional scaling and conic gradients from earlier on it. Note that since our absolutely positioned ::before is top-aligned with the top edge of its .card parent, we should also scale it relative to this edge as well (the transform-origin needs to have a value of 0 along the y axis, while the x axis value doesn’t matter and can be anything).

Note that we’ve moved from CSS to SCSS in this example.

This is much better, as it can be seen in the embed below, which is also editable so you can play with the --ratio and see how everything adapts nicely as you change its value.

Since we haven’t set a padding on the card, the text may go all the way to the edge and even slightly out of bounds given it’s a bit slanted.

That shouldn’t be too difficult to fix, right? We just add a padding, right? Well, when we do that, we discover the layout breaks!

This is because the aspect-ratio we’ve set on our .card elements is that of the .card box specified by box-sizing. Since we haven’t explicitly set any box-sizing value, its current value is the default one, content-box. Adding a padding of the same value around this box gives us a padding-box of a different aspect ratio that doesn’t coincide with that of its ::before pseudo-element anymore.

So, it looks like the solution is pretty straightforward — we need to set box-sizing to border-box to fix our problem as this applied the aspect-ratio on this box (identical to the padding-box when we don’t have a border).

Sure enough, this fixes things… but only in Firefox!

The text should be middle-aligned vertically as we’ve given our .card elements a grid layout and set place-content: center on them. However, this doesn’t happen in Chromium browsers and it becomes a bit more obvious why when we take out this last declaration — somehow, the cell in the card’s grid gets the 3/ 1 aspect ratio too and overflows the card’s content-box:

Fortunately, this is a known Chromium bug that should probably get fixed in the coming months.

In the meantime, what we can do to get around this is remove the box-sizing, padding and place-content declarations from the .card element, move the text in a child element (or in the ::after pseudo if it’s just a one-liner and we’re lazy, though an actual child is the better idea if we want the text to stay selectable) and make that a grid with a padding.

Let’s say we also want our cards to have rounded corners. Since a directional transform like the scaley on the ::before pseudo-element that creates our background also distorts corner rounding, it results that the simplest way to achieve this is to set a border-radius on the actual .card element and cut out everything outside that rounding with overflow: hidden.

However, this becomes problematic if at some point we want some other descendant of our .card to be visible outside of it. So, what we’re going to do is set the border-radius directly on the ::before pseudo that creates the card background and reverse the directional scaling transform along the y axis on the y component of this border-radius:

Putting it all together, here’s an interactive demo that allows changing the aspect ratio by dragging a slider – every time the slider value changes, the --ratio variable is updated:

Rachel Andrew says that the CSS Working Group designed an aspect ration unit at a recent meeting. The idea is to find an elegant solution to those times when we want the height of an element to be calculated in response to the width of the element, or vice versa.

Say, for example, we have a grid layout with a row of elements that should maintain a square (1:1) ratio. There are a few existing, but less-than-ideal ways we can go:

Chris wrote up a full rundown of possible ways to maintain aspect ratio, but none of them are as elegant as CSS Working Group’s proposed solution:

See that? An aspect-ratio property with an aspect ratio unit would calculate the height of the element based on the value of the width property.

Or, in the case of a grid layout where the columns are set to auto-fill:

Very cool! But where does the proposal go from here? The aspect-ratio is included in the rough draft of the CSS Sizing 4 specification. Create an issue in the CSSWG GitHub repo if you have ideas or suggestions. Or, as Rachel suggests, comment on her Smashing Magazine post or even write up your own post and send it along. This is a great chance to add your voice to a possible new feature.

The post Designing An Aspect Ratio Unit For CSS appeared first on CSS-Tricks.