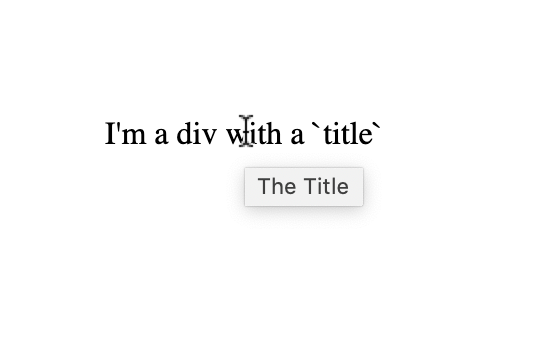 You know the title attribute? I can do this:

And now if I’m on a device with a mouse pointer and hover the cursor over that element, I get…

Which, uh, I guess is something. I sometimes use it for things like putting an expanded date or time on an element that uses shorthand for it. It’s a tiny bit of UX helpfulness reserved exclusively for sighted mouse users.

But it’s not particularly useful, as I understand it. Ire Aderinokun dug into how it’s used for the <abbr> element (a commonly cited example) and found that it’s not-so-great alone. She suggests a JavaScript-enhanced pattern. She also mentions that JAWS has a setting for announcing titles in there, so that’s interesting (although it sounds like it’s off by default).

I honestly just don’t know how useful title is for screen readers, but it’s certainly going to be nuanced.

I did just learn something about titles though… this doesn’t work:

If you hover over that element, you won’t get a title display. You have to do it like this:

When you use title like that, the hoverable area to reveal the title popup is the entire rectangle of the <svg>.

I was looking at all this because I got an interesting email from someone who was in a situation where the title popup only seemed to come up when hovering over the “filled in” pixels of an SVG, and not where transparent pixels were. Weird, I thought. I couldn’t replicate in my testing either.

Turns out there is a situation like this. You can apply a <title> within a <use> element, then the title only applies to those pixels that come in via the <use>.

If you remove the “white part” title, you’ll see the “black part” only comes up over the black pixels. Seems to be consistent across browsers. Just something to watch out for if that’s how you apply titles.