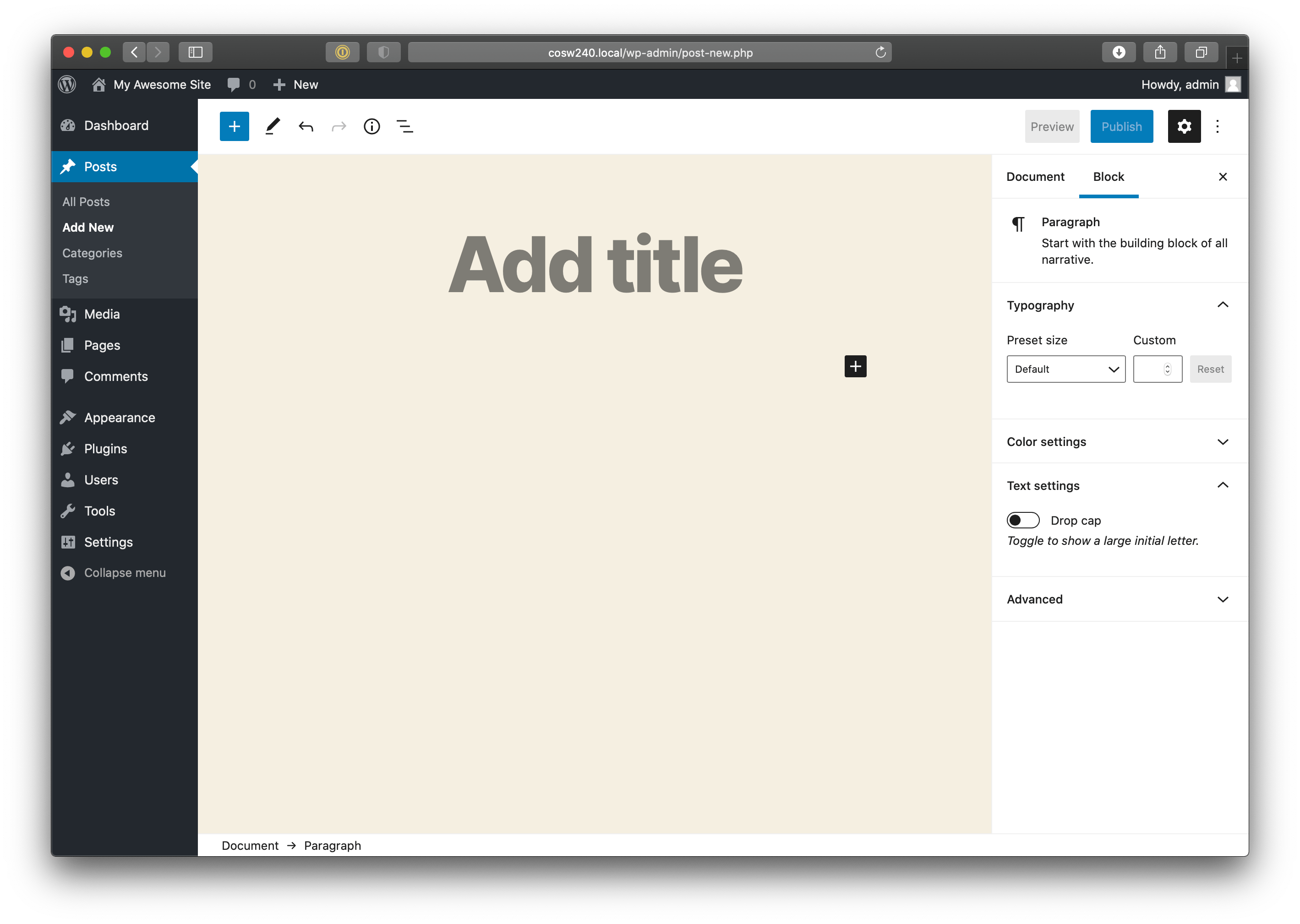 I’m a WordPress user and, if you’re anything like me, you always have two tabs open when you edit a post: one with the new fancy pants block editor, aka Gutenberg, and another with a preview of the post so you know it won’t look wonky on the front end.

It’s no surprise that a WordPress theme’s styles only affect the front end of your website. The back end posy editor generally looks nothing like the front end result. We’re used to it. But what if I said it’s totally possible for the WordPress editor nearly mirror the front end appearance?

All it takes is a custom stylesheet.

Mind. Blown. Right? Well, maybe it’s not that mind blowing, but it may save you some time if nothing else. 🙂

WordPress gives us a hint of what’s possible here. Fire up the default Twenty Twenty theme that’s packaged with WordPress, fire up the editor, and it sports some light styling.

Right then, enough pre-waffle! Let’s get on with making the WordPress editor look like the front end, shall we?

OK I was lying, just a little more waffling. If you’re using a WordPress theme that you don’t develop yourself, it’s probably best that you setup a child theme before making any changes to your main theme. </pre-waffle>

Fire up your favorite text editor and open up the theme’s functions.php file that’s usually located in the root of the theme folder. Let’s drop in the following lines at the end of the file:

What this little snippet of code does is tell WordPress to add support for a custom stylesheet to be used with Gutenberg, then points to where that stylesheet (that we’re calling editor-style.css) is located. WordPress has solid documentation for the add_theme_support function if you want to dig into it a little more.

Now we’re getting right into our wheelhouse: writing CSS!

We’ve added editor-styles support to our theme, so the next thing to do is to add the CSS goodness to the stylesheet we defined in functions.php so our styles correctly load up in Gutenberg.

There are thousands of WordPress themes out there, so I couldn’t possibly write a stylesheet that makes the editor exactly like each one. Instead, I will show you an example based off of the theme I use on my website. This should give you an idea of how to build the stylesheet for your site. I’ll also include a template at the end, which should get you started.

OK let’s create a new file called style-editor.css and place it in the root directory of the theme (or again, the child theme if you’re customizing a third-party theme).

Writing CSS for the block editor isn’t quite as simple as using standard CSS elements. For example, if we were to use the following in our editor stylesheet it wouldn’t apply the text size to <h2> elements in the post.

Instead of elements, our stylesheet needs to target Block Editor blocks. This way, we know the formatting should be as accurate as possible. That means <h2> elements needs to be scoped to the .rich-text.block-editor-rich-text__editable class to style things up.

I just so happened to make a baseline CSS file that styles common block editor elements following this pattern. Feel free to snag it over at GitHub and swap out the styles so they complement your theme.

I could go on building the stylesheet here, but I think the template gives you an idea of what you need to populate within your own stylesheet. A good starting point is to go through the stylesheet for your front-end and copy the elements from there, but you will likely need to change some of the element classes so that they apply to the Block Editor window.

If in doubt, play around with elements in your browser’s DevTools to work out what classes apply to which elements. The template linked above should capture most of the elements though.

First of all, let’s take a look at what the WordPress editor looks like without a custom stylesheet:

Let’s compare that to the front end of my test site:

Things are pretty different, right? Here we still have a simple design, but I’m using gradients all over, to the max! There’s also a custom font, button styling, and a blockquote. Even the containers aren’t exactly square edges.

Love it or hate it, I think you will agree this is a big departure from the default Gutenberg editor UI. See why I have to have a separate tab open to preview my posts?

Now let’s load up our custom styles and check things out:

Ipso facto — no more previews in another tab. Cool, huh?

Making the WordPress editor look like your front end is a nice convenience. When I’m editing a post, flipping between tabs to see what the posts looks like on the front end ruins my mojo, so I prefer not to do it.

These couple of quick steps should be able to do the same for you, too!

The post Getting the WordPress Block Editor to Look Like the Front End Design appeared first on CSS-Tricks.