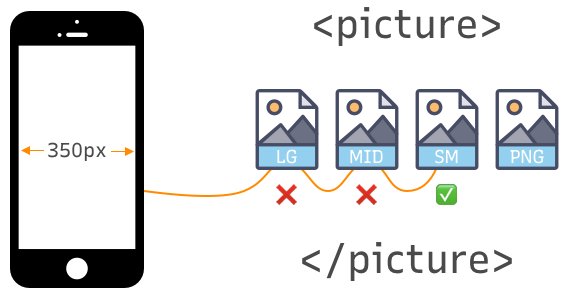 Beyond using media queries and modern CSS layouts, like flexbox and grid, to create responsive websites, there are certain overlooked things we can do well to make responsive sites. In this article, we’ll dig into a number tools (revolving around HTML and CSS) we have at the ready, from responsive images to relatively new CSS functions that work naturally whether we use media queries or not.

In fact, media queries become more of a complement when used with these features rather than the full approach. Let’s see how that works.

Remember when we could just chuck width: 100% on images and call it a day? That still works, of course, and does make images squishy, but there are a number of downsides that come with it, the most notable of which include:

When using images on the web, we have to make sure they’re optimized in terms of their resolution and size. The reason is to ensure that we have the right image resolution to fit the right device, so we don’t end up downloading really large and heavy images for smaller screens which could end up reducing the performance of a site.

HTML offers the <picture> element that allows us specify the exact image resource that will be rendered based on the media query we add. As described earlier, instead of having one image (usually a large, high-resolution version) sent to all screen sizes and scaling it to the viewport width, we specify a set of images to serve in specific situations.

In this example, picture.png is the full-size image. From there, we define the next-largest version of the image, picture-lg.png, and the size reduces in descending order until the smallest version, picture-sm.png. Note that we’re still using media queries in this approach, but it’s the <picture> element itself that is driving the responsive behavior rather than defining breakpoints in the CSS.

The media queries are added appropriately to scale with the sizes of the picture:

Interestingly, we can also label each image by image density —  1x, 2x, 3x and so forth — after the URL. This works if we have made the different images in proportion to each other (which we did). This allows the browser to determine which version to download based on the screen’s pixel density in addition to the viewport size. But note how many images we wind up defining:

Let’s look specifically at the two tags nested inside the <picture> element: <source> and <img>.

The browser will look for the first <source> element where the media query matches the current viewport width, and then it will display the proper image (specified in the srcset attribute). The <img> element is required as the last child of the <picture> element, as a fallback option if none of the initial source tags matches.

We can also use image density to handle responsive images with just the <img> element using the srcset attribute:

Another thing we can do is write media queries in the CSS based on the screen resolution (usually measured in dots per inch, or dpi) of the device itself and not just the device viewport. What this means is that instead of:

This approach lets us dictate what image to render based the screen resolution of the device itself, which could be helpful when dealing with high resolution images. Basically, that means we can display high quality pictures for screens that support higher resolutions and smaller versions at lower resolutions. It’s worth noting that, although mobile devices have small screens, they’re usually high resolution. That means it’s probably not the best idea rely on resolution alone when determining which image to render. It could result in serving large, high-resolution images to really small screens, which may not be the version we really want to display at such a small screen size.

What <picture> gives us is basically the ability to art direct images. And, in keeping with this idea, we can leverage CSS features, like the object-fit property which, when used with object-position, allows us to crop images for better focal points while maintaining the image’s aspect ratio.

So, to change the focal point of an image:

The min() function specifies the absolute smallest size that an element can shrink to. This function proves really useful in terms of helping text sizes to properly scale across different screen sizes, like never letting fluid type to drop below a legible font size:

min() accepts two values, and they can be relative, percentage, or fixed units. In this example, we’re telling the browser to never let an element with class .box go below 45% width or 600px, whichever is smallest based on the viewport width:

The same sort of thing goes for the max() function. It also accepts two values, but rather than specifying the smallest size for an element, we’re defining the largest it can get.

And, hey, we can even set a minimum and maximum range instead using the minmax() function:

Many of us have been clamoring for clamp() for some time now, and we actually have broad support across all modern browsers (sorry, Internet Explorer). clamp() is the combination of the min() and max() functions, accepting three parameters:

Have you ever built a page with a large heading or sub-heading and admired how great it looked on a desktop screen, only to check it on a mobile device and find out that’s it’s too large? I have definitely been in this situation and in this section I’ll be explaining how to handle such problems.

In CSS, you can determine sizes or lengths of elements using various units of measurements, and the most used units of measurements includes: px, em, rem, %, vw, and vh. Although, there are several more units that aren’t used as frequently. What’s of interest to us is that px can be considered an absolute unit, while the rest are considered relative units.

A pixel (px) is considered an absolute unit mainly because it’s fixed and does not change based on the measurement of any other element. It can be considered as the base, or root, unit that some other relative units use. Trying to use pixels for responsive behavior can bump into issues because it’s fixed, but they’re great if you have elements that should not be resized at all.

Relative units, like %, em, and rem, are better suited to responsive design mainly because of their ability to scale across different screen sizes.

Again, the default font size for most browsers is 16px and and that’s what rem units use to generate their computed values. So, if a user adjusts the font size on the browser, everything on the page scales properly depending on the root size. For example, when dealing a root set at 16px, the number you specify will multiply that number times the default size. For example:

What if either you or the user changes the default size? As we said already, these are relative units and the final size values will be based off of the new base size. This proves useful within media queries, where you just change the font size and the entire page scales up or down accordingly.

For example, if you changed the font-size to 10px within the CSS, then the calculated sizes would end up being:

Note: This also applies to percentage %. For instance:

And what’s the difference between rem and em units? It’s what the unit uses as its base element. rem calculates values using the font size of the root (<html>) element, whereas an element declaring em values references the font size of the parent element that contains it. If the size of specified parent element is different from the root element (e.g. the parent elements is 18px but the root element is 16px) then em and rem will resolve to different computed values. This gives us more fine-grained control of how our elements respond in different responsive contexts.

See that? We just looked at a number of really powerful and relatively new HTML and CSS features that give us additional (and possible more effective) ways to build for responsiveness. It’s not that these new-fangled techniques replace what we’ve been doing all along. They are merely more tools in our developer tool belt that give us greater control to determine how elements behave in different contexts. Whether it’s working with font sizes, resolutions, widths, focal points, or any number of things, we have more fine-grain control of the user experience than ever before.

So, next time you find yourself working on a project where you wish you had more control over the exact look and feel of the design on specific devices, check out what native HTML and CSS can do to help — it’s incredible how far things have come along.